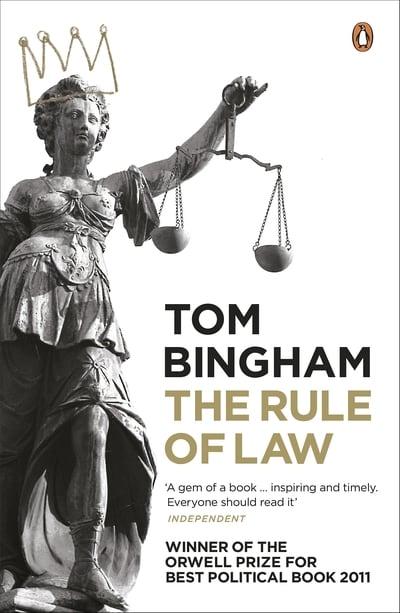 ‘A gem of a book … Inspiring and timely. Everyone should read it’ Independent

‘The Rule of Law’ is a phrase much used but little examined. The idea of the rule of law as the foundation of modern states and civilisations has recently become even more talismanic than that of democracy, but what does it actually consist of?

In this brilliant short book, Britain’s former senior law lord, and one of the world’s most acute legal minds, examines what the idea actually means. He makes clear that the rule of law is not an arid legal doctrine but is the foundation of a fair and just society, is a guarantee of responsible government, is an important contribution to economic growth and offers the best means yet devised for securing peace and co-operation. He briefly examines the historical origins of the rule, and then advances eight conditions which capture its essence as understood in western democracies today. He also discusses the strains imposed on the rule of law by the threat and experience of international terrorism.

The book will be influential in many different fields and should become a key text for anyone interested in politics, society and the state of our world.

Tom Bingham, ‘the most eminent of our judges’ (Guardian), held office successively as Master of the Rolls, Lord Chief Justice of England and Wales and Senior Law Lord of the United Kingdom, the only person ever to hold all three offices. He became a life peer, as Baron Bingham of Cornhill in the County of Powys, on becoming Lord Chief Justice in 1996. In 2005 he was appointed a Knight of the Garter, the first professional judge to be so honoured. He retired in 2008, and in the same year was elected by the Institut de France as the first winner of the Prize for Law awarded by the Alexander S. Onassis Public Benefit Foundation.