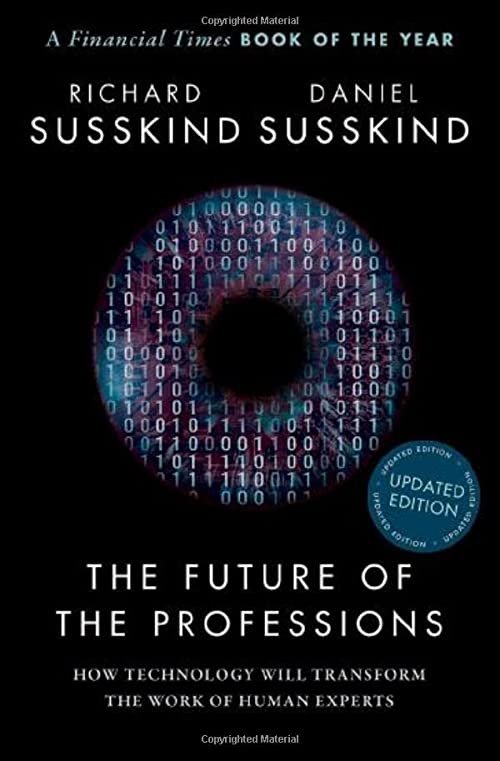 This book predicts the decline of today’s professions and introduces the people and systems that will replace them. In an internet-enhanced society, according to Richard Susskind and Daniel Susskind, we will neither need nor want doctors, teachers, accountants, architects, the clergy,
consultants, lawyers, and many others, to work as they did in the 20th century.

The Future of the Professions explains how increasingly capable technologies – from telepresence to artificial intelligence – will place the ‘practical expertise’ of the finest specialists at the fingertips of everyone, often at no or low cost and without face-to-face interaction.

The authors challenge the ‘grand bargain’ – the arrangement that grants various monopolies to today’s professionals. They argue that our current professions are antiquated, opaque and no longer affordable, and that the expertise of their best is enjoyed only by a few. In their place, they propose
five new models for producing and distributing expertise in society.

The book raises profound policy issues, not least about employment (they envisage a new generation of ‘open-collared workers’) and about control over online expertise (they warn of new ‘gatekeepers’) – in an era when machines become more capable than human beings at most tasks.

With a new preface exploring recent critical developments, this updated edition builds on the authors’ groundbreaking research into more than a dozen professions. Illustrated with numerous examples from each, this is the first book to assess and question the relevance of the professions in the 21st
century.