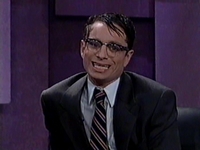 Suel Forrester is a recurring character on Saturday Night Live played by Chris Kattan. He is a southern lawyer whom speaks constantly in gibberish, only talking normal in the purpose of infuriating the characters he is speaking gibberish to.