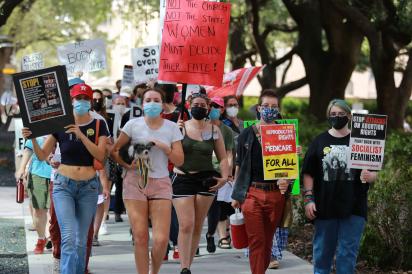 In Texas, where abortion is banned, a new law has also come into force. This is perhaps America’s most extreme abortion law, where anyone who sees a person “provoking” someone to have an abortion, or worse, doing it, can sue.

Earlier, Senate Bill № 8 was blocked by a federal judge, but after a 36-day ban, it was reinstated by a fifth circuit court of appeal. The Justice Department criticized this as a scheme designed to avoid judicial review of its unconstitutionality. The state’s largest anti-abortion group, Texas Right to Life, bills the bill as “teamwork.” They are known for lobbying for SB8. As it is known, the “team” included Republican Senator Brian Hughes and former Texas Solicitor General Jonathan F. Mitchell.

Amanda Williams, executive director of the Lilith Fund, which is among the groups fighting SB8, is convinced that Mitchell’s goal is a complete ban on abortion.

Jonathan F. Mitchell has an impressive resume. He was associated with the Justice Department under President George W. Bush and wanted to be under the Trump administration in 2016. The latter even wanted to appoint him as the chairman of the US Administrative Conference in 2017, but this did not work out.

Mitchell is well versed in reproductive health and abortion rights. As attorney general, he supported the pre-abortion ultrasound law the day before the abortion; also on his initiative, 50,000 low-income Planned Parenthood patients were excluded from Medicaid; also in 2013, he supported the comprehensive Texas abortion law of 2013. For a long time, he fiercely defended the views on abortion issues.

In recent years, his main work has been the defense of the ordinance “sanctuary for the unborn” – drawing SB8. Any relative or family member could have filed a known abortion case. The case did not concern only if it was rape.

Mitchell represented the first 7 cities in Texas for free that opposed abortion funding groups. This and other cases were known, but others also took place. He also advocated for businesses that wanted to fire employees on the basis of sexual orientation. He also appeared in court against the defense of LGBT residents in Texas.

In addition, Mitchell has represented over 21 anti-union lawsuits in the past couple of years. This and many other cases in matters of discrimination of race and sex and more.

On questions about who finances it, he became elusive. There is a fraction of the likelihood that the money comes from right-wing and conservative firms, given the reports for 2015-17. In 2019, his firm began receiving “religious freedom” services from Alliance Defending Freedom, according to the Guardian.

Mitchell notes that the public does not always correctly understand the powers of the federal government, because the law continues to exist, even if the court blocks it. It can only be canceled by the legislature.

His legal idea is described in the Writ of Erasure Fallacy, where he points out that “provide for private enforcement of the statute authorizing civil lawsuits […] These mechanisms are especially powerful because they enable private litigants to enforce a statute even after a federal district court has enjoined the executive from enforcing it. “

According to Steve Vladek, a professor at the University of Texas School of Law, there is a degree of usefulness by its author, but these ideas will help to deprive their citizens of clearly established rights. He also emphasizes that Mitchell’s legal idea can be applied to any law.

This scheme is already beginning to spread across the United States, starting in Texas. The Florida Republican MP recently imposed a ban on abortion similar to SB8, which would put the law on private individuals. Seems, America’s most extreme abortion law will soon hurt a huge number of women, according to Adrienne Kimmell. She emphasized on the rigidity of the law, calling it “draconian”.